Movie Theaters or cinema is a place to show movies to the audience. At the beginning of the film, the film was shown in cafes, tea houses and other places. With the advancement and development of the film, there has been a cinema with specific cinema chairs built specifically for the screening of movies. The development of the film – from silent to sound and even stereo, from black and white to color, from ordinary screen to wide screen to curtain, ring screen, the cinema’s shape, size, proportion and acoustic technology have changed a lot. Cinemas must meet the process requirements of film screenings, get the proper visual and auditory effects, and now movies have become the argument for people after dinner. Here are a few points you need to consider.

1. How many audience do you want to fit? – How many movie theater chairs can your theater room contain?

Cinemas should be arranged reasonably and appropriately. When the total size of the cinema is large, it is advisable to have multiple auditoriums.

The size of the cinema can be divided into

The quality standards of cinemas are four grades: A, B, C D (combined with extra large, large, medium and small). A is the best, it is determined on a specific basis. The corresponding requirements of B, C,D etc. shall comply with the following provisions.

The choice of cinema base should be reasonably arranged according to the overall plan of local town construction and should meet the following requirements.

The general theater seating layout should be clearly defined in terms of functional division. Pedestrian traffic and traffic, pedestrian flow and internal routes (process and management) are clear and convenient, and do not interfere with each other, and should meet the following requirements.

Fourth, the equipment room should be placed in the least interference to the audience, and should pay attention to safety, hygiene, noise reduction, vibration reduction and equipment installation and maintenance.

The number of cinema seats in each row should meet the following requirements.

Cnema chairs should be arranged in an arc or a line similar to the arc (small can be arranged in a straight line), or a mixture of the two methods. The radius of curvature of the arc in the center of the auditorium or the length of the 1/2 hall is generally equal to the horizontal distance from the screen to the last row.

In addition to the width of 0.6m per 100 people, the auditorium should meet the following requirements.

The sound source position is high. The tweeter of the speaker is typically located 2/3 of the height of the screen, which helps to evenly radiate sound energy to the hallway in all directions and rear seats.

The volume can be adjusted as needed. The power of the sound system is not limited in principle, so it can be direct sound, and it is not necessary to rely too much on the reflected sound to make up for the lack of loudness of some seats.

The sound of the theater is restored from the vocal cords of the film, so it is not necessary to rely on the acoustic conditions of the auditorium to change the original pitch, but only to meet the acoustic frequency response characteristics of the hybrid studio to faithfully restore the sound on the film vocal cord.

There should be a uniform distribution of sound fields in the auditorium.

The acoustic frequency response characteristics of the cinema should be consistent with that of a film studio mixed recording studio.

Cinema audience halls, like the auditoriums of other performance buildings, should avoid the conditions of various acoustic defects such as echo, tremor echo, acoustic focusing, coupling effects.

The film is accepted by the audience through visual effects. Vision is the feeling that people distinguish the brightness and color characteristics of external objects. Vision plays an important role in distinguishing the spatial properties of objects, such as size, distance and so on. When people watch a 35mm regular movie, because the area of the picture is small, the visual conditions only require viewing the full picture and seeing the picture, and the spatial attributes of the vision are indistinguishable. However, widescreen, 70mm wide film and other large-field movies use the characteristics of wide screen and large field of view to make the visual effect of the audience close to real life. They can use the spatial characteristics of the vision to distinguish the distance, position and object of the object. The distance between them helps to give the audience a sense of realism and presence.

The requirements of the cinema perspective determine the viewer’s distance to the screen, that is, the line of sight. The oblique viewing angle of the spectator is determined by the degree of distortion produced when viewing the picture to limit the distortion of the picture to the allowable range.

After the height of the viewpoint is determined, the height difference between the adjacent two rows can be calculated from the distance between the two rows of viewers and the two similar triangles formed by the line of sight super high value C, so that the rows are calculated row by row until the last row of the ground slope is obtained. elevation. The line of sight super high value C is the average statistical value from the human eye to the top of the head, and the C value is generally taken to be 12 cm. In the ground slope design of a 35mm ordinary screen movie, if the front and rear rows of the middle area are staggered, the C value can be reduced by 12 centimeters per two rows to reduce the slope of the ground. The principle is that after the misplacement, the rear audience from the front Look at the picture in the gap between the heads of the two viewers. However, in the ground slope design of the large-field movie, the C value should be 12 cm (or 10 cm) per row. Because the large field of view is wide, it can no longer be seen from the gap between the two heads of the front row of viewers.

The establishment of cinemas will encounter many problems concerning the construction of cinemas, especially in the second and third tier cities. Nowadays, the film market is especially young, many people are reflected in some second- and third-tier cities can not watch a large-scale blockbuster, and even some people go to other districts or cities to watch movies. To make the following recommendations for this.

Last but not least, what kind of commercial movie theater seating should you choose?

If you don’t have an idea, you can think about these different kind of designs.

Your cineplex should be diversity, so just you not only need normal compact cinema chairs but also recliners. 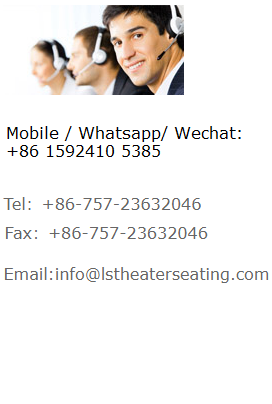 Pls feel free to contact us for more information by email:

Or Send Us Inquiry

Scroll back to top